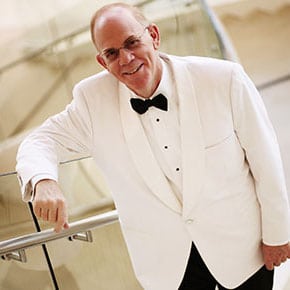 Don’t miss one of our community’s most anticipated events and our biggest fundraiser of the year!

Delicious food and incredible music compete for center stage at this elaborate evening designed to delight the senses. Enjoy a fun cocktail hour prior to the chef prepared multi-course meal served family style. Who said Harry Potter was for kids?? Not us!

All aboard the Hogwarts Express for a one-way trip to the magical, musical world of Harry Potter. Listen as the Festival Orchestra conjures your favorite tunes from the films, like Hedwig’s Theme, Dobby the House Elf, Fawkes the Phoenix, Aunt Marge’s Waltz, Nimbus 2000 and Harry’s Wondrous World!

Richard Kaufman has devoted much of his musical life to conducting and supervising music for film and television productions, as well as performing film and classical music in concert halls and on recordings.

Kaufman regularly appears as a guest conductor with symphony orchestras throughout both the United States and around the world. In May 2015, he made his conducting debut with the Boston Pops, substituting for John Williams at the Annual Pops Film Night. In 2016, Mr. Williams graciously invited him to share the podium at the annual Tanglewood Film Night, and in 2018, he again joined Mr. Williams in concerts with the Chicago Symphony. We can’t wait to see Richard here, conducting our very own critically acclaimed Festival Orchestra.

For Special Needs seating please call the festival office to assist you with your tickets 970-385-6820.